PRODUCTS
Manufactured by us

Pressure equipment with CE marking, designed and manufactured as per DEP 2014/68/EU as well as ASME code VIII Div.-1 and TEMA C.

The purpose of any pre-heater is to exchange the heat of a hot fluid (water or steam) with another colder substance (any gas in the three families as per UNE 60.002). The location of the pre-heater or heat exchanger is basically centred around an RMS, where in water below the RMS a pressure regulator is installed, the purpose of which is to reduce the pressure of the gas to that at which the exchanger operates.

When the pressure of gas drops, its temperature decreases by around 0.5°C for each bar of pressure drop. Because of this, and to avoid anomalies in the operation of the devices that accompany the heat exchanger in the gas facility, an increase in the temperature of the gas fluid is planned to compensate for this temperature drop.

Another possible layout of the assembly of the heat exchanger device is next to the consumption device for natural gas or another gas fluid from the three families, in order to increase the temperature of the gas fluid and to thus obtain greater performance from the device consuming it.

This basically consists of a cylindrical recipient inside of which there is a bundle of two U-shaped tubes through which the cold fluid circulates. The tubular bundle can be disassembled and removed from the enclosure and head.

Within the enclosure the hot fluid circulates (steam/hot water), entering the recipient via a pipe from outside, moving around the tubular bundle and warming its walls, which then transfer this heat to the gas.

Designed as per ASME code VIII Div.-1 Subject C and certified as per the Directive on Pressure Equipment 2014/68/EU in Module H1 up to a rating of ANSI-600.

Use of hot water or steam from the same factory in which the device is installed as a heating fluid, or hot water originating from boilers specific to the RMS.

These are designed and manufactured both for horizontal and vertical mounting, for better flexibility and adaptation to the available space, as to minimize the size of the Regulating and Metering Station, and therefore, the space that it occupies. 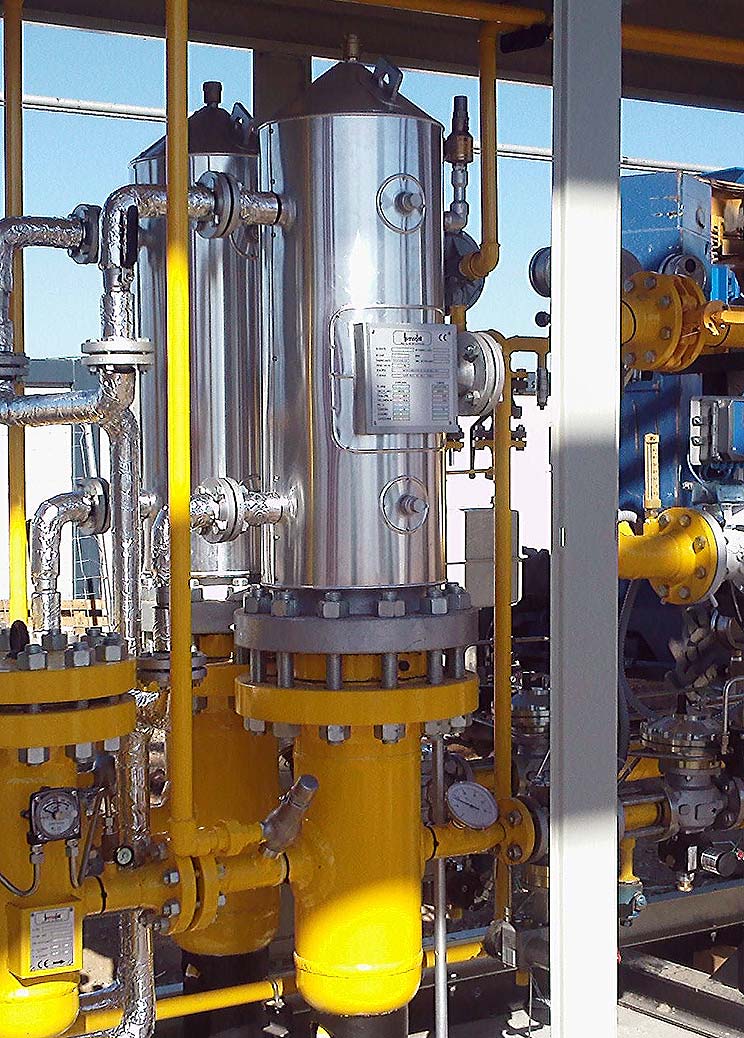